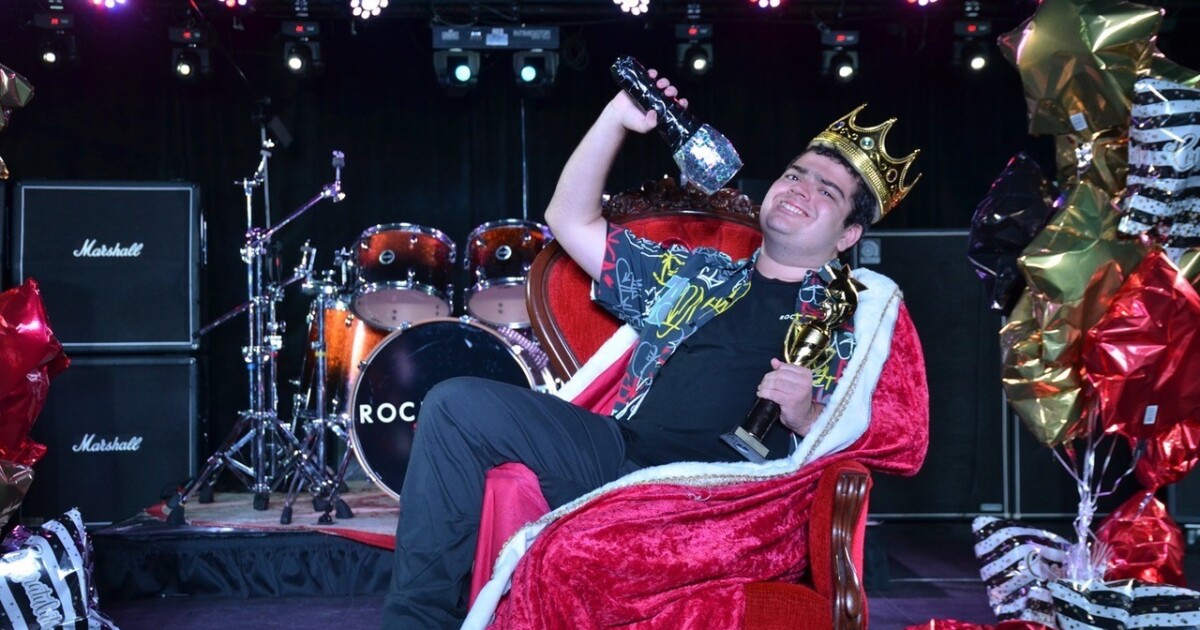 Column: the winners bask in the brilliance of the show “Autism has talent”

“My bank called me recently because they noticed very suspicious activity on my credit card. … It was from a gym membership.

This sentence came from a comedian perched behind a drum kit who punctuated each joke with a bada boom and a cymbal bang as laughter broke out.

“I also realized that if at first you don’t succeed, skydiving is not for you…” Bada boom…

Carson Wehlage, 19, of Rancho Santa Fe, was on stage in front of cameras doing his comedy routine to draw votes from viewers online.

Judges Simon Cowell, Sofia Vergara, Heidi Klum and Howie Mandel were nowhere in sight during this talent show. But that didn’t matter. The contestants poured their heart and soul into their performances under the lights of San Diego’s Rock and Roll facility near the Sports Arena, where many professional acts rehearse.

Singer Jonah Palmer took second place; third place was won by pianist Bruce Kopstein, with the precocious talent of being able to listen to a song and then play it.

“Working in a professional recording studio and being the center of attention with sound checks and lighting is so important to these kids who struggle to find a way to shine among their traditional peers,” says Jan Wehlage, Carson’s mother.

This was the second “Autism’s Got Talent” production. Instead of being silenced by confinement, this event was born out of the pandemic.

When the pandemic scuttled their usual fundraisers — Splash for Cash swimathon, Beers and Cheers and Lights, Camera, Autism event — Autism Society of San Diego board members got creative to finding a way to generate financial support for vital services for the autism community.

The resulting program not only raised funds, it raised the bar.

“No fundraiser I’ve ever organized gave me the heady feeling we had in the studio,” says Jorie Ellazar. She and her husband, Joel, manage marketing and public relations for a living. They both serve on the board of the local autism society.

The idea for a contest showcasing the talents of those the group serves came from a brainstorming session between Jorie and a few friends.

Rock and Roll San Diego, a longtime client of Joel, is equipped with a stage, control room and rehearsal studios that became available when music tours and shows were canceled due to the lockdown .

It was a perfect setting to record performances, so the Ellazars enlisted studio support, and “Autism’s Got Talent” was born.

They created a website to post the contestants’ photos, biographies, and performance videos. Viewers could vote as many times as they wanted, for $5 each, during the five-day voting period, with proceeds going to autism programs.

Word spread, and 23 contestants from across San Diego County registered and submitted videos for the initial contest last October.

Their talents were diverse. The auditions included making a salad and creating a Lego stop-motion animation. Any skill was fair game.

The competition far exceeded their expectations, says Jorie. Not only did this raise awareness in the community, but it also boosted the self-confidence of the performers.

The home-recorded videos were posted online with moving stories from the contestants that proved “American’s Got Talent” has nothing on “Autism’s Got Talent.”

The top seven performers were invited for a second round, this time in the Rock and Roll studio. Again, the votes have been counted. Three finalists were chosen by voters and the artist with the most votes was crowned the winner.

The 2020 competition, won by teenage DJ Jonah Parks of Carlsbad, caught the attention of the Southern California autism community. This year’s event was therefore open to attendees from Los Angeles, Riverside and Orange counties.

Not only did the initial contest raise approximately $40,000 for services, but more importantly, it boosted the spirits, camaraderie and self-esteem of contestants.

Carson, who placed second last year, insisted on competing again this year. He campaigned enthusiastically for the votes and his hard work paid off.

This summer, during the autism society’s 20th anniversary celebration for its surf camp and CampICan programs, Carson approached families and gave them free beach balls. He mentioned the talent show and asked for their vote if they liked his act.

“There were so many people there, families with young children who were struggling,” says Wehlage, Carson’s mother. “It gave them hope to hear Carson speak to them.”

She explained that her son struggled to speak when he was young. When he finally spoke, he either failed to finish his sentences or repeated the last words spoken by others.

“He had all the complications of autism, speech delay and ADHD. Now he’s doing stand-up comedy. Carson is an example of what you can become.

Carson also came up with the idea of ​​carrying a poster as he had seen homeless people do. Except Carson’s poster said, “I’m not homeless. I’m a contestant on ‘Autism Has Talent.’ I want your vote. He walked along La Jolla Shores with his sign.

“Carson has a really good heart and he loves to make people smile and laugh,” his mother says. “Despite the links to autism, he wants to inspire other children who may not yet understand that they can turn their disability off.”

When he won, Carson told his parents, “I feel so good about myself.”

He graduated from Torrey Pines High School in June. When I asked him what his future held for us, Carson replied, “I’m not sure yet. I want to do more comedy.

In his act, Carson acknowledged that he lacked social cues and he talked about sports.

“I don’t understand how this celebration works,” he told listeners. After winning a match last week, he said: “I decided to throw the ball into the crowd like they do on TV. Apparently that’s not acceptable in bowling. »… Bada… boom.