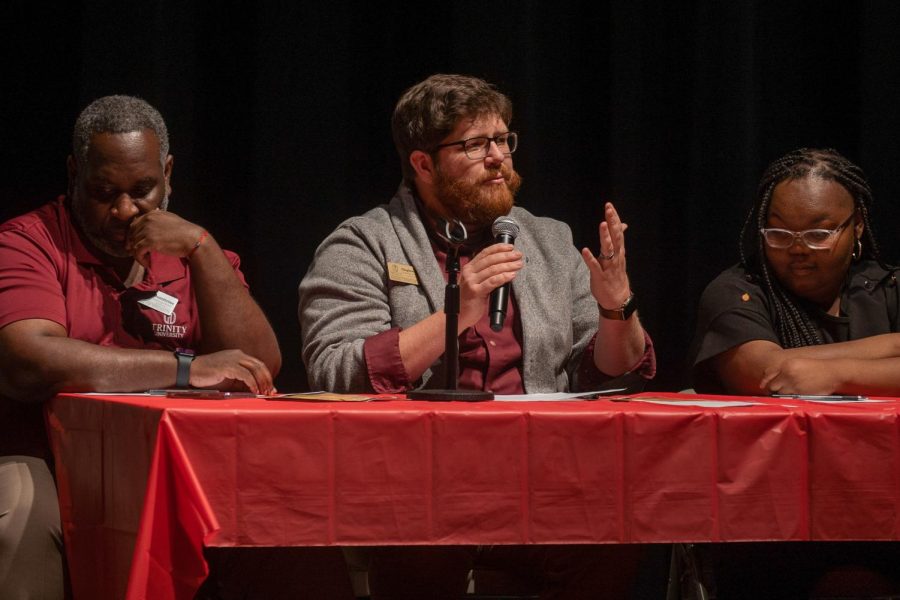 Spotlight has become a formal event with an art gallery competition, free food and a semi-formal dress code

With Spotlight 2020 canceled and the 2021 edition moved to Jim Potter Intramural Field due to COVID-19 precautions, this year’s student talent show has returned to the stage at Laurie Auditorium and has been revamped to celebrate the body talented student from Trinity. On Friday, March 25 from 6-9 p.m., 11 numbers competed in Spotlight for first, second, and third place, including 10 vocal numbers.

Each year, the Student Programming Board (SPB) Entertainment Committee plans the Spotlight talent show. This year, SPB Entertainment Chair and Junior Biochemistry and Molecular Biology Major Ty Kostopoulos began planning Spotlight in late February. Kostopoulos said the show returning to its original location in Laurie Auditorium was an upgrade (with a real stage and lighting) from where it stood last year on the intrafield. -muros due to concerns surrounding the pandemic.

New additions to Spotlight that Kostopoulos thought would include were an art gallery, appetizers, drinks, and a semi-formal dress code to make the talent show more special, like a formal event.

“We asked TigerTV to record every performance so that artists can use it in their portfolios in the future, as many of them want to pursue music. I wanted it to be more special and more like a real concert for them,” Kostopoulos said.

Kostopoulos conceived of the student art gallery competition as a way to showcase student talent that was not necessarily performative in nature.

“There are so many different art forms, and the students at Trinity are so talented, and all that talent doesn’t fit into the performing arts like music and theatre. I thought it would be fun to have something for people who can draw, paint or sculpt to have a platform to show off what they can do,” Kostopoulos said.

Sam Cole, Junior Accountant Major and SPB Gig Committee Member, explained how Spotlight is formatted. Cole said after each person performed, there were a few minutes for the judges to give their comments. After everyone played, the judges voted for a first, second, and third winner. The audience also had the opportunity to vote on the crowd favorite performance.

Senior psychology major Tara Kyaw won first place on the talent show singing “For Good” from the Broadway musical “Wicked” with her singing partner, Kalei Lucas-Marinelli. It was Kyaw’s first time performing on Spotlight and said she and Lucas-Marinelli were very surprised to win the top spot.

“We went to Spotlight just for fun memories because it’s our last year. I thought everyone was super talented, and I think everyone’s a winner. There’s a lot of commitment from everyone to put together your own number and take the time to perform it on stage in front of people, which can be very daunting,” Kyaw said.

Kyaw said Spotlight is a great opportunity for students to show off their talents and take pride in their own accomplishments.

“It’s just a nice community to be able to talk to all the other people who have been involved and to support each other in our endeavors,” Kyaw said.